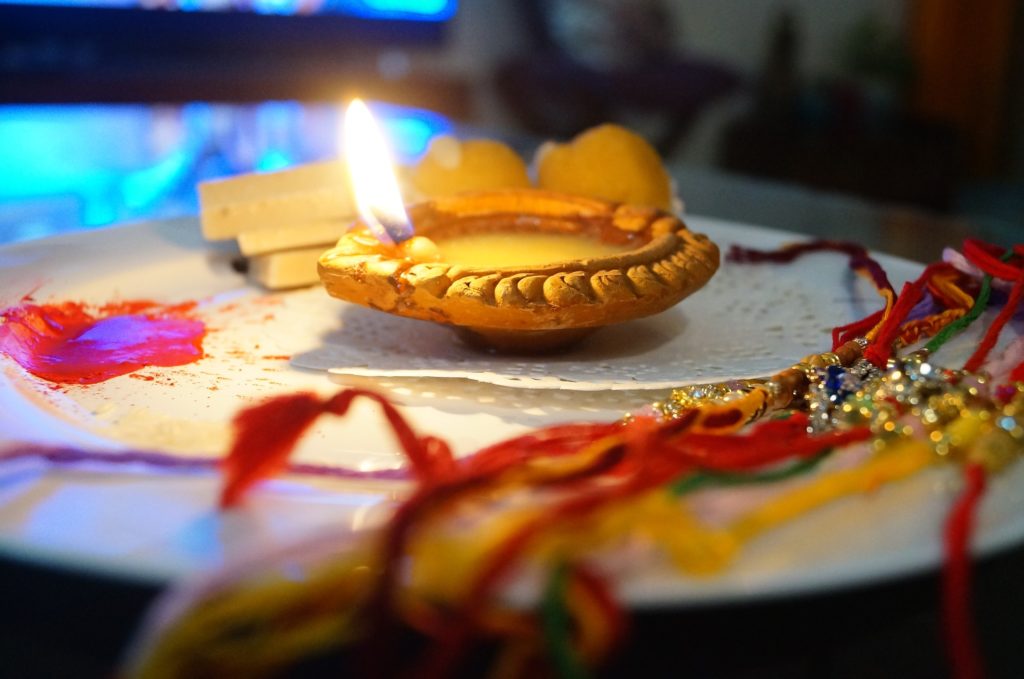 I grew up with questions about my parents’ cultural beliefs.

As a child of liberal parents when I was at our community’s festive dinner parties, I often asked, “Why do men get served dinner first?  Why can’t we eat as one and serve one another?”

As a teen when I learned about the horrid tradition of sati,  still practiced in some Indian villages, I asked, “Why do women throw themselves in the cremation fire when their spouses die, but husbands do not?”

When my brother was born, I witnessed the inequality even more in daily life. I wondered why I was criticized for staying out late and he was not.

And while we had a beautiful holiday dedicated to strengthening our sibling bond every year, the question in my little feminist heart surfaced:  Why does my brother get a rakhi during Raksha Bhandan and I do not?

Raksha Bandhan is a celebration of the bond between a brother and sister. Literally translated, a rakhi is “a knot of protection” my sister and I would tie to our brother’s and cousin brothers’ wrists every year. Our elders and family would tell us that by tying this little string around my brother’s wrist, he was vowing to protect his sisters and that in exchange we would pray for his prosperity and protect him as he embarked out in the world.  But I wondered, what about the reverse?

What about my own dreams –  did they not deserve the same prosperity and protection? What about my sister and all my girl friends who did not have brothers? Would they remain unprotected?  I’ve asked these questions since I was a child and I continue to ask them now that I have my own children.

In order to find answers, I did a little digging into our history.

What was the meaning of these rituals that were passed down from generation to generation?

There’s the example of a 16th century queen, Karnavati who was sent troops by her neighboring sultan Humayan to protect her from invasion after she gave him a rakhi. And our scriptures mention that Lord Indra’s wife Indrani tied a thread given to her by Lord Vishnu around her husband’s wrist to protect him from demons during the Dev-Asur war. The sacred thread of Raksha was not invented by Indrani though. It had been tied between husband and wife, father and daughter, friends of both genders and gurus and disciple.

Aha!, the answer: The promise of protection crossed age, relation, gender, caste and even the time-distance barrier.

Then why did we only adopt it for men? Our cultural society has always assumed that somehow our daughters are inferior to our sons and that by tying a string around a boy’s wrist, we are valuing his place in society and letting him go out into the world with a strong sense of self. Girls, on the other hand, have historically stayed home and haven’t been afforded such value. In today’s world though, don’t we all want a symbol of love and protection like the ‘rakhi’ to be reciprocal?  Don’t we want our daughters to feel the same protections as our sons? Don’t we want that special celebration to be a day dedicated to both genders?

Honoring our sisters: past, present, and future…

This year, I ask that we honor our ancestors by acknowledging that the promise made between siblings is a joint protection for one another. This year, I challenge you to modernize our wonderful, traditional sibling bond by honoring ALL siblings, boys and girls alike. Why? Because our daughters are as much a part of our past, present, and future as our sons and we should treat them that way.

Share this...
« go to vegan salad dressing recipe
bhai…you are my rakh star »

To guide and inspire a new generation of South Asian women to lead a positive, healthy, culturally infused lifestyle.